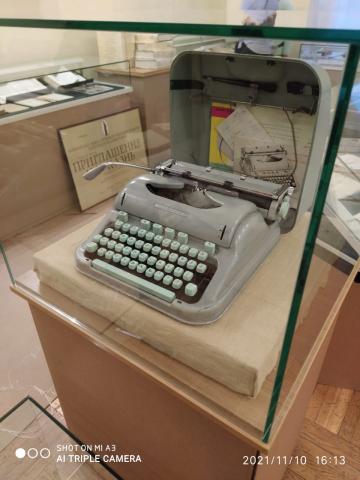 An exhibition entitled "Набоков. Возвращение." (Nabokov.The Return.) was opened on November 12, 2021 at the Pushkinskii Dom (Pushkin House) Museum (officially the Institute of Russian Literature) in St. Petersburg, to celebrate the arrival of the last tranche of important Nabokoviana (books, manuscripts, letters, memorabilia) remaining after the death of Dmitri Nabokov in 2012. In accordance with Dmitri’s wishes that some of the material he left should be returned to Russia, it was gifted to the Pushkin House by the Vladimir Nabokov Literary Foundation through the intermediary of the International Vladimir Nabokov Society.

Other material left after Dmitri’s death has previously been gifted by VNLF to the rare book and manuscript library at Harvard University, Dmitri’s alma mater. Vladimir Nabokov had worked as de facto curator of Lepidoptera at Harvard’s Museum of Comparative Zoology from 1941 to 1948, and had lectured in Russian and European literature in 1952, and carried out his most intensive researches on Pushkin’s Eugene Onegin at Harvard’s Widener Library in 1952-53. This material is now catalogued and available for research purposes.

The Pushkin House exhibition closed on November 26 but will later be followed by a permanent exhibition. Additionally, the Nabokov Center of the Pushkinskii Dom will be soon opened for researchers; a room for it has already been allocated (a major achievement in a building constructed back in 1829-1832).

The opening of the exhibition was a grand occasion, with music by Nicholas Nabokov and several speeches by esteemed Russian intellectuals and literary museum directors. Since then, a record number of visitors came to see the exhibition.

Several publications about the exhibit can be found here: