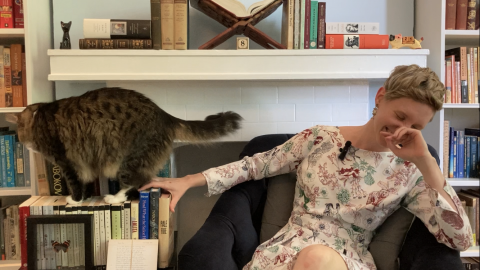 I am both excited and anxious to share this labor of love and obsession for your amusement on this, the 63rd anniversary of John Shade's death and Vladimir Dmitrievich Nabokov's 152nd birthday. In the linked video I recite in full "Pale Fire," which I committed to memory in 8 weeks earlier this year.

Thank you to the board members of the IVNS, especially Dana Dragunoiu and Stanislav Shvabrin, who encouraged me to make this video, and the wonderful Nabokovians at the Hidden Nabokov conference in Wellesley who listened to my live performance of lines 665-834 on June 19th.

Please enjoy the video, as well as a Nabokovian Easter Egg Hunt! Once shrunk from life-size to screen-size I doubt you can see all of the books and props I gathered from around my house to set this scene, so here is the key:

The majority of my books by or about Nabokov are on the table to my right, but the mantel above features books by authors named or alluded to within the novel, including Alexander Pope, Edgar Allan Poe, T.S. Eliot, Robert Browning, Marcel Proust, Fyodor Dostoevsky, Arthur Conan Doyle, Matthew Arnold, Saint Augustine of Hippo, John Keats, John Milton, and John Donne. No Thomas Flatman—sorry, Kinbote.

The large open book in the center is The Riverside Shakespeare turned to Act IV, Scene iii of Timon of Athens at Pale Fire's titular line. Non-book props include a mounted Red Admirable (Vanessa atalanta)—yes, I know what Nabokov said about display butterflies; the 8 from a German block set that says "Acht" beneath the lemniscate, for Iris Acht; a black cat figurine (actually a pepper shaker), for the Goldsworths' cat; my cat Ollie in the outtake at the end "sporting a neck bow of white silk"; my moon phase earrings; and a perpetual calendar set at July 21st. The rubber-banded stack of index cards is from the Ginkgo Press facsimile published in 2011.

I perhaps had too much fun transforming my living room, but not nearly as much fun as I did (and do) reciting the poem.

Thank you for watching, listening, and reading!

Well done! I enjoyed your…